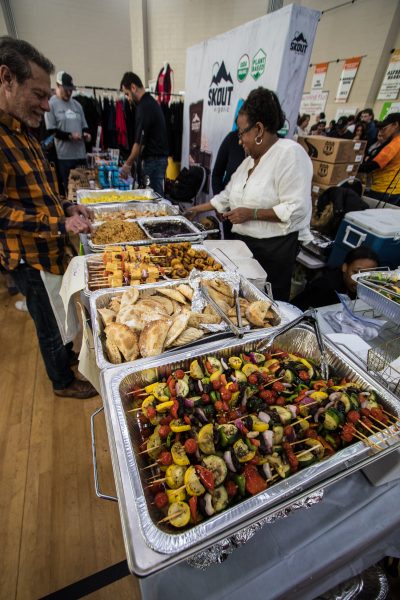 What we choose to eat is one of the most impactful decisions we make. By replacing animal foods with plant foods, we can benefit not just our personal health, but the world around us. Replacing animal foods with plant foods reduces the animal suffering, environmental destruction, and negative climate impact that result from animal agriculture. It is a meaningful way to help make a better world and to feel good about how we live our lives. At the same time, we remove foods that have been linked with serious health problems, and replace them with beneficial plant foods that contribute to good health.

BVS organizes an active schedule of educational, outreach, and community building events (read about them on our Events and Outreach pages.) We also organize the annual Boston Veg Food Fest, one of the largest vegan events in the world. We encourage non-vegetarians and vegetarians alike to join us as we learn and share information, friendship, and community in carrying out our Mission. Everyone is welcome at BVS events.

What People Are Saying About BVS

“Being involved in BVS changed my life. It has increased my ethical awareness, my feelings of self-worth. I can’t imagine going back to the way things were before. BVS has been an unbelievably positive experience.”
—Debby Bloom

“The best times I’ve had living in Boston have been at BVS. BVS regularly offers fabulous guest speakers and makes possible awesome educational experiences for the community. It is the absolute truth. BVS rocks!”
—Tara Dawn Hochstein

“It was great being involved with BVS — I hope there is something even closely comparable to it in L.A. BVS is by far the best run and most consistent all-volunteer organization I have ever seen!”
— Samir Sanghani

“The thing that I like most about Boston is BVS.”
— Archana Shah, M.D.

“Thank you for letting me support and participate in the Boston Veg Food Fest. I think this is one of the best things Boston offers to the world. BVS has my undying praise for pulling this off every year.”
— Charlie Behrens, BVFF Volunteer

“The Boston Vegetarian Society is probably the most active vegetarian society in the United States. Soon to celebrate their 20th anniversary, in addition to all their monthly programs, they put on the Boston Veg Food Fest, an all-volunteer endeavor which brings thousands of people from all over to learn about vegetarianism and veganism in a free fun friendly setting….They are doing such good work in the world; I’m honored they considered me part of their mission.”
—Dr. Michael Greger’s Monthly Newsletter 04/04

“We come from Connecticut to attend the festival, and I put in for the day off from work ten months in advance. For my wife and I, it’s our favorite day of the year. It’s Christmas and both our birthdays all rolled into one.”
— Scott Walker, Attendee

“The Boston Veg Food Fest was absolutely amazing! It was possibly the best festival I’ve ever been to. And that includes music festivals.”
— Robert Stark, Attendee

“Thank you for doing the subway ads. They started everything for me. I went to your festival, and what I saw and heard there put me on the path to being vegan. Seeing all the foods that we can eat, and all the restaurants, showed that it is easy to be vegan. The speakers and everyone there just seemed happy!”
—Carol Manson, Attendee

“It’s not just about the food at the Festival, which is incredible — it’s about the connections you make there — the lectures, the people — it’s transformative. The festival solidifies all the information, whether you are beginning the journey or have been veg a long time.”
—Mitch Jacobson, M.D., Attendee

“Wow!!! This food fest poster is HUGE!!! Of course I have seen the ads on the subway cars, but this station ad is amazing!!! Great exposure! I loved this billboard so much I had to get a photo and have forwarded it to everyone in my contact list. I’m so excited! This festival is the highlight of my year every year. I wait all year for this!”
—Joanne Paul, BVFF Volunteer

“Our six year old is very excited about trying so many fun treats! We consider it the best day of the year.”
—Sherri Sklarwitz, Attendee

“The Festival was wonderful! I learned so much! The program was diverse, the speakers knowledgeable and approachable, and to top it all off, it was fun!”
— Karen Waite, Attendee

“Kudos to another great food fest this past year.  You once again did a fabulous job in running the event.  We’ve been in New England for two years now, and really appreciate the help in finding vegan resources.”
— Rich Leonard, Attendee

“My sister and I are from Maryland, and we attended the festival for the first time, and it was fantastic (off the chain). I learned about the festival while flying with American Airlines in their on-flight magazine. I have been a veg*n for over 25 years, and my sister was eating poultry and fish before attending the festival. She has now decided to follow a vegan diet. The speakers were awesome, very informative, comical, and not the least bit boring. I learned a lot even though I’ve been veg for a long time.  I was introduced to new products that are not yet available in this area, and I was able to get contact information for those vendors. This is a very worthwhile event, and I’m glad I came. Oh, and we had a ball sampling all the different foods.”
— Clarice B. Pemberton-Cook, Attendee